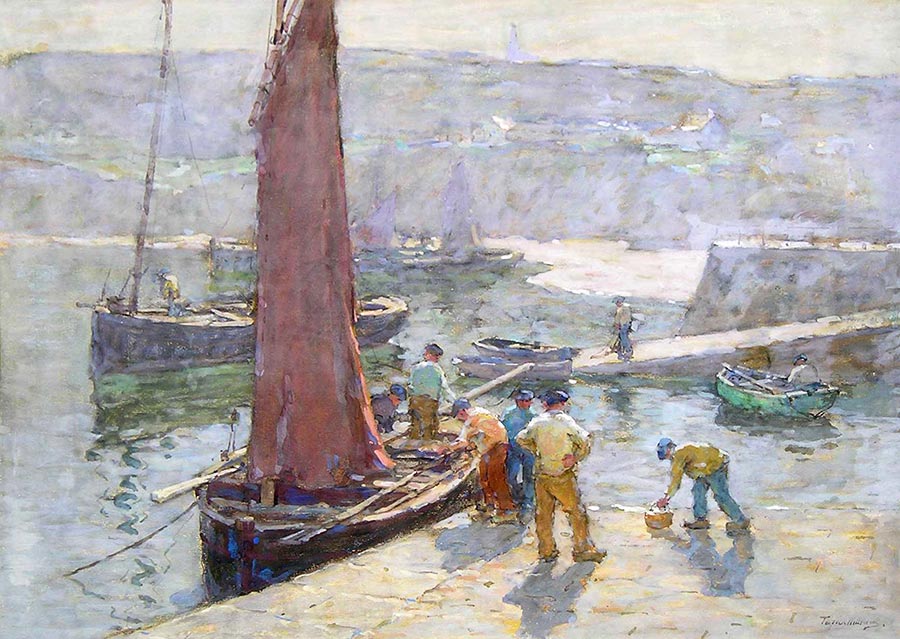 Exhibited: London, The Royal Institute of Painters in Watercolours.

An outstanding example of the work of one of Britain’s finest Impressionists and most important and influential figures in 20th Century British art. Terrick Williams was President of The Royal Institute of Painters in Watercolours, Vice-President of The Royal Institute of Oil Painters, Chairman of The Arts Club and a member of The Royal Academy. In the 1880s, he studied in Antwerp under Charles Verlat and in Paris at l’Académie Julian. Williams was passionate about painting outdoors and had an exceptional ability to observe the qualities of light and colour and translate them beautifully in oils, watercolours and pastels. In Paris, he concentrated on figure painting and many of his compositions, painted on his extensive travels, feature local people going about their daily chores. Williams had a particular interest in harbour and fishing subjects, which drew him repeatedly to art colonies by the sea in Cornwall and northern France. He visited the Breton fishing port of Douarnenez in 1918 – 19. Williams was influenced by the French and Dutch painters of the mid-19th Century and by his contemporaries in the French Impressionist Movement, especially Monet. Like them, he was fascinated by the effects of sunshine and shadows, especially the quicksilver play of light on water.

19th and Early 20th Centuries | Impressionist and European | Marine and Coastal | Watercolour / Bodycolour | Williams (Terrick John) | Winter Exhibition
This website uses cookies to improve your experience. We'll assume you're ok with this, but you can opt-out if you wish. Cookie SettingsAcceptRead More
Manage consent