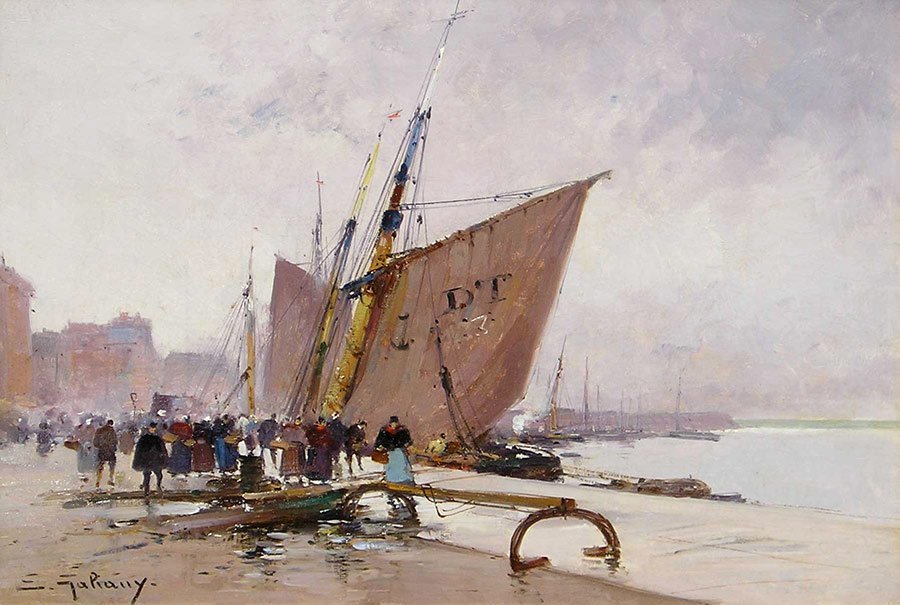 Eugène Galien-Laloue was born in Montmartre, Paris. As a young man, he faked his age and enlisted in the army to fight in the Franco-Prussian War. On his return home, he took up painting as a career. He made his debut at le Salon des Artistes Français in 1877, at the age of 23, and continued to exhibit there throughout his life. Galien-Laloue’s impressionist portrayal of Paris in the early 1900s records the rebirth of the city with its new, broad boulevards and grand buildings and captures the lively atmosphere of Parisian society of La Belle Époque. Galien-Laloue himself, however, was devoted to his painting and led a rather quiet life, never developing a taste for travel and shunning the entertainments which Paris had to offer. He enjoyed the solitude of the countryside and moved out of Paris many times to depict the landscapes of Normandy and Seine-et-Marne, painting along the riverbanks, canals and coast. He used a number of pseudonyms to overcome an exclusive contract with a major gallery. These included L. Dupuy, J. Lievin and E. Galiany, which are listed in le catalogue raisonné.

19th and Early 20th Centuries | Annual Sale | Galien-Laloue (Eugène) | Impressionist and European | Marine and Coastal | Oil
This website uses cookies to improve your experience. We'll assume you're ok with this, but you can opt-out if you wish. Cookie SettingsAcceptRead More
Manage consent