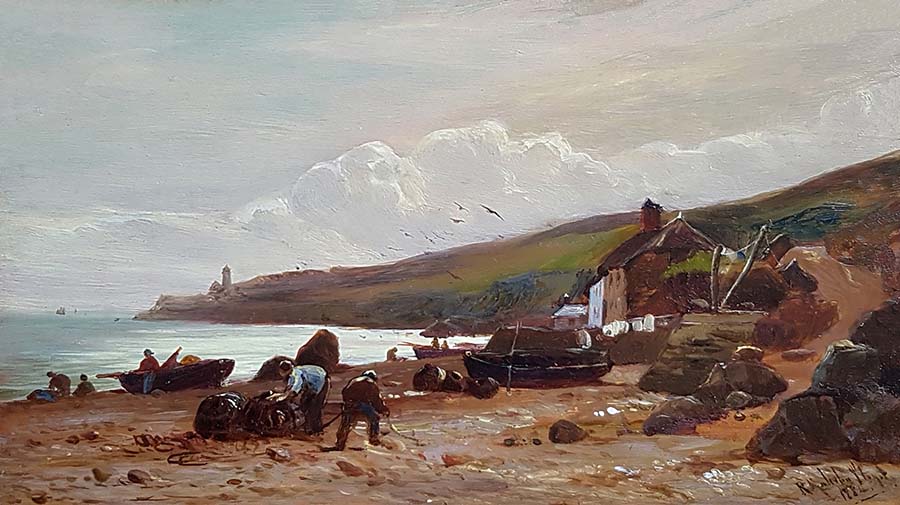 Lloyd shows the thriving fishing community of Hallsands 33 years before huge waves swept its cottages into the sea. Despite its precarious position between the cliffs and the ocean, Hallsands relied on a natural sea defence created by its shingle beach. In the late 1890s, however, 660,000 tons of shingle were dredged offshore to provide concrete for the expansion of the Royal Navy Dockyard in Plymouth. Erosion of the beach began and even a new sea wall was unable to save the village. In January, 1917 a combination of gales from the South-East and exceptionally high tides breached the defences. The waves engulfed the village, claiming all but one of its 37 cottages. Miraculously, no one was killed, but the families of Hallsands lost their homes, their livelihoods and most of their possessions and the village never recovered. All that remains today are ruins – a stark reminder of the harsh consequences of man’s interference with nature.

19th and Early 20th Centuries | Devon and Dartmoor | Lloyd (Robert Malcolm) | Marine and Coastal | Oil | Winter Exhibition
This website uses cookies to improve your experience. We'll assume you're ok with this, but you can opt-out if you wish. Cookie SettingsAcceptRead More
Manage consent