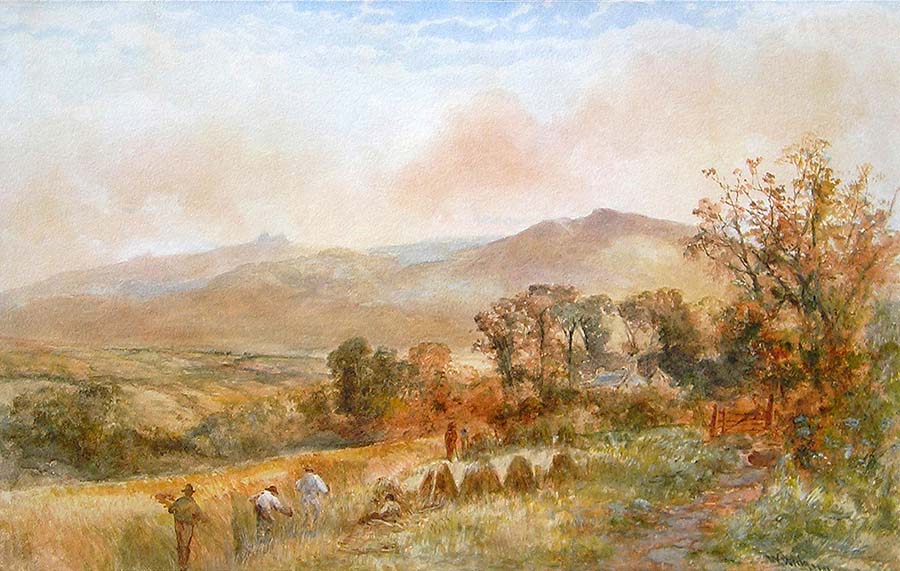 William Widgery did much to develop the art of moorland painting during the second half of the 19th Century and could justifiably be acknowledged as the father figure of an informal “Dartmoor School”. He was devoted to Dartmoor and ahead of his time in the way he painted it, catching the moods of the moor in a bold, impressionist style, full of colour, light and atmosphere – a refreshing contrast to the sombre, heavy landscapes of the day. He loved to work en plein air, painting from nature, just as he saw it. Wrapped up against the elements, he would stride out across the moor to set up his easel before a grand vista or beside a rushing stream, working on his picture there and then before returning to his studio at Lydford to apply the finishing touches. When Widgery’s career as a professional painter was blossoming, Dartmoor could hardly have been less fashionable in artistic circles. Its isolation and challenging terrain hindered its appeal as a source of subject matter. William Widgery changed all that. His work revealed the artistic potential of Dartmoor, its untamed beauty and the wild, mysterious character of its landscapes. Widgery’s pictures proved so popular that they sold as fast as he could paint them, and it is recorded that by the time he was in his mid-fifties, this self-taught artist had painted more than 3,000 pictures and had sold every one of them. His success promoted Dartmoor as an attractive subject, creating a strong market, and he was an important influence on the work of many who followed in his footsteps, notably his son, Frederick John.

19th and Early 20th Centuries | Devon and Dartmoor | Spring Exhibition | Watercolour / Bodycolour | Widgery (William)
This website uses cookies to improve your experience. We'll assume you're ok with this, but you can opt-out if you wish. Cookie SettingsAcceptRead More
Manage consent