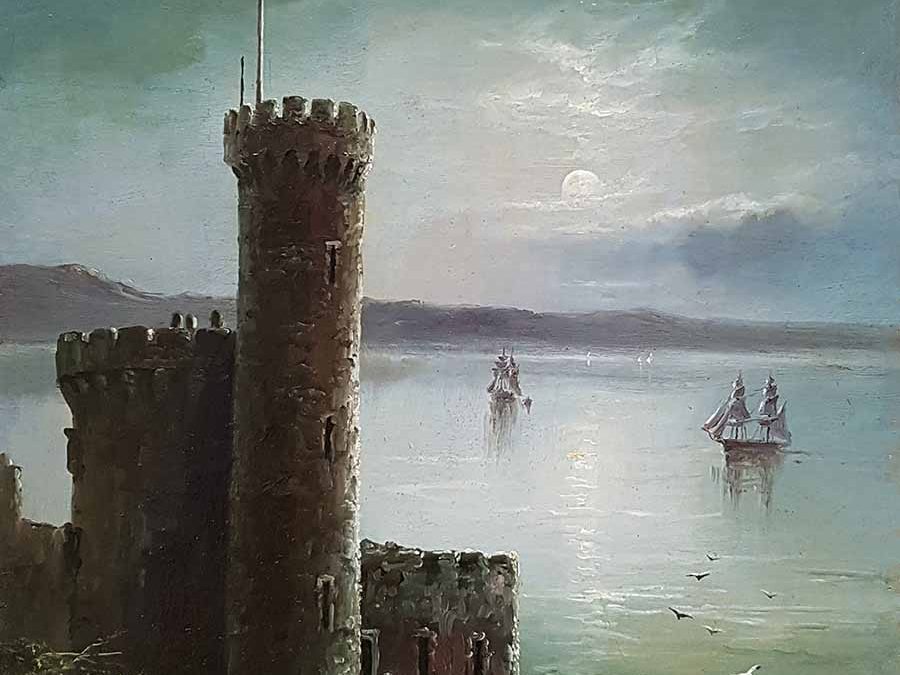 Picklecombe Fort was built in the 1860s on the south-east coast of Cornwall to protect the western entrance to Plymouth Sound and The Royal Navy Dockyard at Devonport. It was commissioned by Lord Palmerston, Queen Victoria’s Prime Minister, to guard against a perceived threat of enemy invasion by sea. The fort’s strategic position ensured it remained armed until the 1920s and again during World War II. The fort was decommissioned in 1956 and stood derelict until the early 1970s, when it was converted into apartments. In her painting, Kilpack shows the Officers’ Mess above the main fort. It was built in the style of Warwick Castle, complete with towers and battlements, in an agreement made with the Earl of Edgcumbe, on whose land the fort was constructed.

A highly accomplished painter of seascapes, coastal scenes and landscapes, Sarah Louisa Kilpack was born in Covent Garden, London, and lived above the family’s tobacconist shop in the heart of the bustling fruit, flower and vegetable market. Her shy personality meant she was often happy to stay indoors, drawing or playing the piano, and she quickly developed an impressive aptitude for both. Sarah Louisa’s family came to rely increasingly on the fees from her concerts, which also enabled her to travel. She was a frequent visitor to the Channel Islands and the South West of England and drew inspiration from the sea and the sky and the sunsets and storms which she painted so well. By the 1880s Sarah Louisa was earning about £500 a year from her painting. She produced many works for exhibition in London, notably at The Society of Women Artists, where she displayed more than 100 paintings between 1867 and 1909.