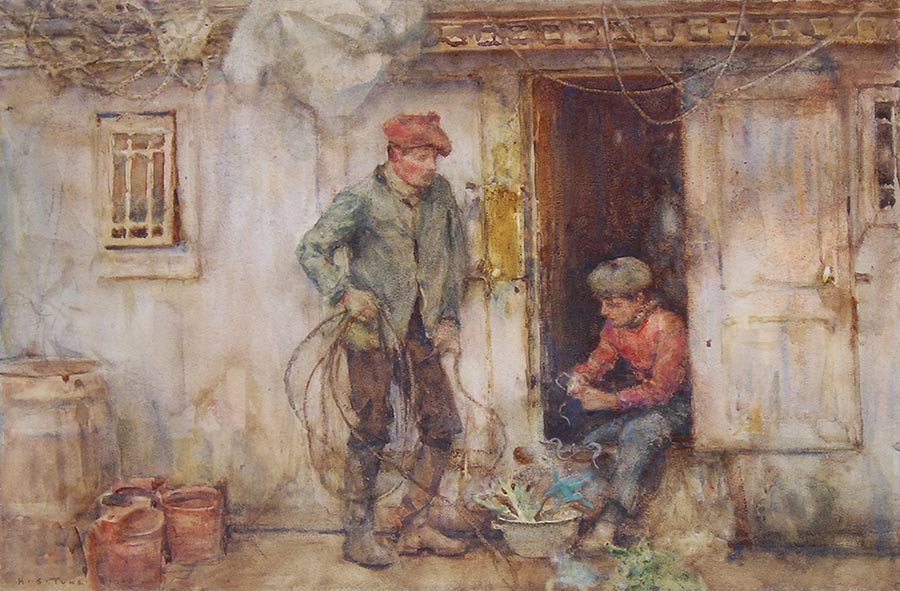 Exhibited: London, The Royal Society of

This watercolour by the renowned Falmouth artist Henry Scott Tuke has only recently been rediscovered, having been in a private collection for many years. Tuke kept a meticulous record of his artistic output and compiled a detailed register of his works. He was an outstanding painter of ships and a master at painting figures. Preparing the Stew was exhibited at The Royal Society of Painters in Watercolours in 1910 and is listed for that year in Tuke’s Register, which also places the scene on board the Russian barque Infaticable.

Tuke was born in York, the son of a doctor, and raised at Falmouth, where he developed a passion for the sea and sailing ships. An accomplished yachtsman who owned several boats himself, Tuke set up a studio aboard his own French brigantine, the Julie of Nantes, and specialised in painting the vessels which came to anchor in the deep waters of Falmouth Bay. Tuke studied at The Slade School under Edward Poynter and won The Slade Scholarship, an achievement which allowed him to travel to Florence and Paris. One of Britain’s foremost impressionist artists, Tuke was a master of painting en plein air. He was a member of The Royal Academy and The Royal Society of Painters in Watercolours, where he exhibited 142 and 147 works, respectively. In a glittering career he was also a founder member of The New English Art Club, and two of his works, August Blue and All Hands to the Pumps, were bought for the nation by Chantrey Bequest.

19th and Early 20th Centuries | Art of Cornwall | Impressionist and European | Marine and Coastal | Tuke (Henry Scott) | Watercolour / Bodycolour
This website uses cookies to improve your experience. We'll assume you're ok with this, but you can opt-out if you wish. Cookie SettingsAcceptRead More
Manage consent