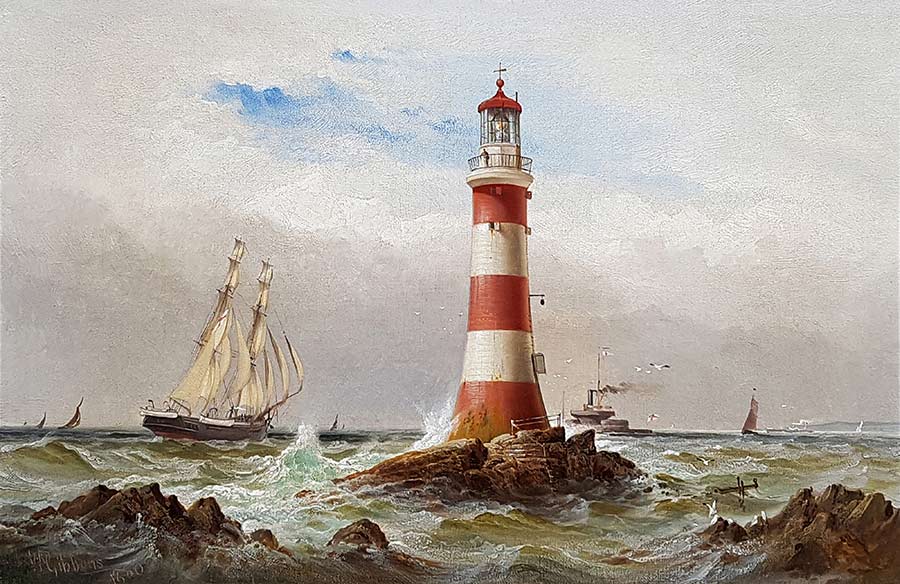 Sail and Steam off The Eddystone

John Smeaton’s famous lighthouse, the third to be built on the treacherous Eddystone Rocks, is shown in its familiar red and white hoops, which were introduced in 1875. Two years later, the decision was taken to replace the lighthouse, as cracks had developed in the rock on which it had been standing for 120 years. The tower was dismantled and partially rebuilt on Plymouth Hoe, with the new lighthouse taking over in 1882. William Gibbons, who was a member of Plymouth Arts Club, specialised in rural, coastal and marine scenes and lived for many years above a smoke house near the city’s busy wharf. A likeable character, he was often seen strolling around Plymouth Barbican in his distinctive top hat and was well known for hosting popular musical evenings.

19th and Early 20th Centuries | Annual Sale | Devon and Dartmoor | Gibbons (William) | Marine and Coastal | Oil
This website uses cookies to improve your experience. We'll assume you're ok with this, but you can opt-out if you wish. Cookie SettingsAcceptRead More
Manage consent