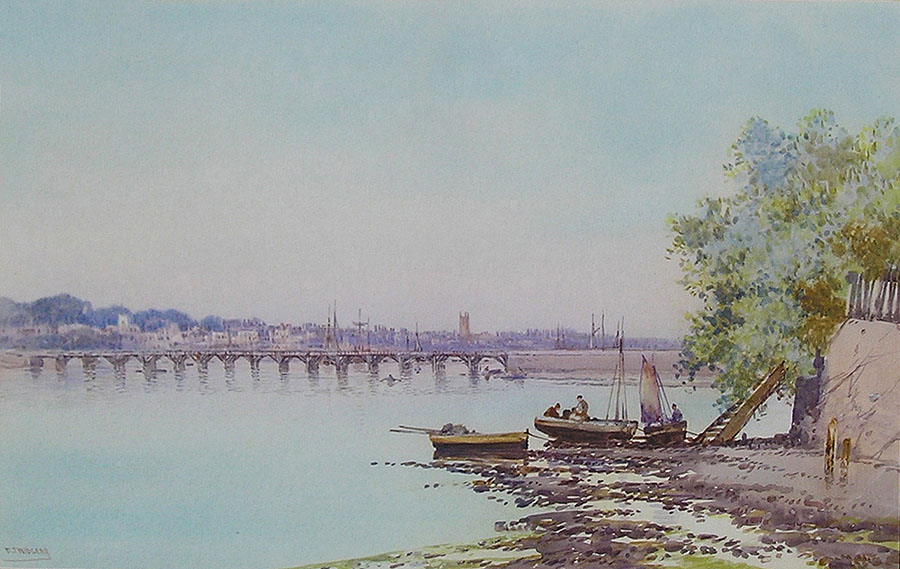 The first of several road bridges linking Shaldon and Teignmouth was opened in 1827. Before this, travellers had the choice of crossing the Teign Estuary by foot ferry or, if they had horses, by making a 14-mile detour up-river and down the opposite bank. The first, wooden, bridge lasted only a decade. Its replacement, opened in 1840, remained in use until the 1920s. By then, cars, lorries and buses were the modes of transport, replacing pedestrians, horses and carts, and a stronger structure was required.

Frederick John Widgery trained at Exeter School of Art, The South Kensington School and with Charles Verlat at The Antwerp Academy. In 1883, Widgery was one of only 34 successful applicants, out of several hundred, to be accepted in the inaugural intake at the Bushey Art School established by Herbert von Herkomer. On his return to Exeter, Widgery set up a studio near the home in which he was to live for the next 49 years. Devon and Cornwall were the inspiration for his paintings and as the railways brought more visitors to the region, Widgery enjoyed a bumper market, with tourists keen to take a memento back home. He also sent a regular supply to his art dealer in London as demand grew, not just for his paintings of the moors, but also of the South West’s picturesque coast and attractive seaside destinations. Alongside his career as an artist, Widgery took an active role in civic life. Elected a councillor in 1898, he became Mayor of Exeter in 1903 and was subsequently made Honorary Freeman of the city, Alderman and Justice of the Peace. His initials, F.J., were incorporated in the car registration numbers for Exeter. Widgery illustrated several books, including “Devon, Its Moorlands, Streams and Coasts” by Lady Rosalind Northcote, published in 1908. He exhibited his work at The Royal Academy, The Royal Institute of Painters in Watercolours, The Royal Institute of Oil Painters and The Walker Art Gallery in Liverpool.

19th and Early 20th Centuries | Devon and Dartmoor | Marine and Coastal | Spring Exhibition | Watercolour / Bodycolour | Widgery (Frederick John)
This website uses cookies to improve your experience. We'll assume you're ok with this, but you can opt-out if you wish. Cookie SettingsAcceptRead More
Manage consent