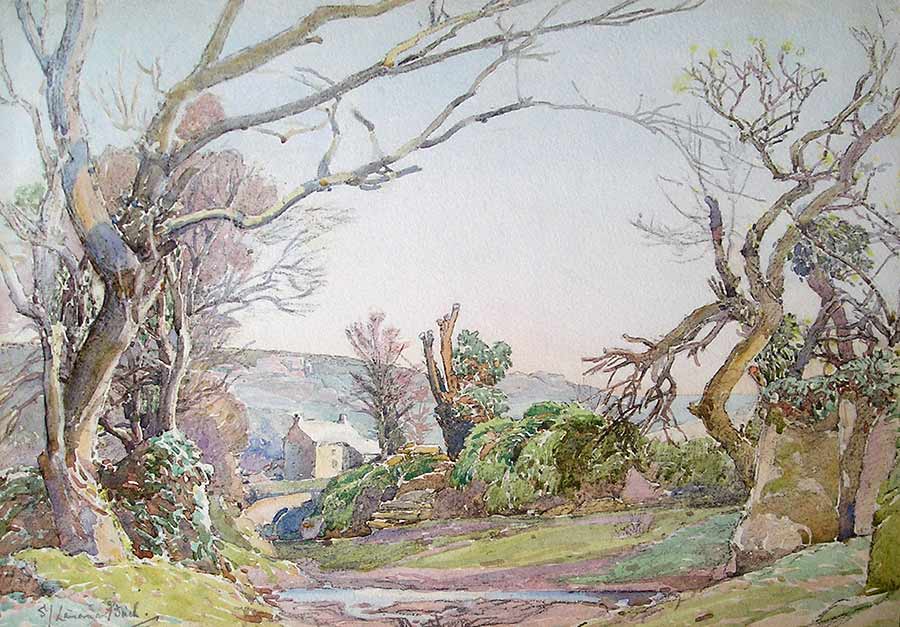 Birch was the father figure of the colony of artists who settled in the idyllic Lamorna Valley in the far west of Cornwall at the end of the 19th Century – a celebrated group which also included Alfred Munnings, Laura and Harold Knight and Augustus John. Birch first visited Cornwall in 1889 and moved to Lamorna in 1892, the year before he made his debut at The Royal Academy at the age of 24. He spent seven months in Paris in 1895-96, studying at l’Atelier Colarossi, before returning to Lamorna, where he lived in a white-washed cottage on the cliffs in full sight and sound of the sea. He set up his studio beside the stream which flows through the Lamorna woods and down to the rocky cove and the sea. As a painter of pure landscape and seascape, Birch loved the freshness and spontaneity of working en plein air. Although greatly influenced by the French Impressionists, notably Alfred Sisley, Camille Pissarro and Claude Monet, Birch developed an unmistakable and distinctive style of his own. He was captivated by the reflected patterns of trees and sky, and his handling of colour and his treatment of water and reflected light are instantly recognisable. Birch continued to exhibit regularly at The Royal Academy until 1955, showing a total of 237 paintings there. He also exhibited at many other venues throughout Britain and abroad, including The Royal Society of Painters in Watercolours, to which he was elected in 1914. He became an associate member of The Royal Academy in 1926 and was elected a full member in 1934. His picture St. Ives, Cornwall was bought for the nation by Chantrey Bequest in 1938 and he is represented in many other public and private collections around the world.

19th and Early 20th Centuries | Annual Sale | Art of Cornwall | Birch (Samuel John Lamorna) | Watercolour / Bodycolour
This website uses cookies to improve your experience. We'll assume you're ok with this, but you can opt-out if you wish. Cookie SettingsAcceptRead More
Manage consent