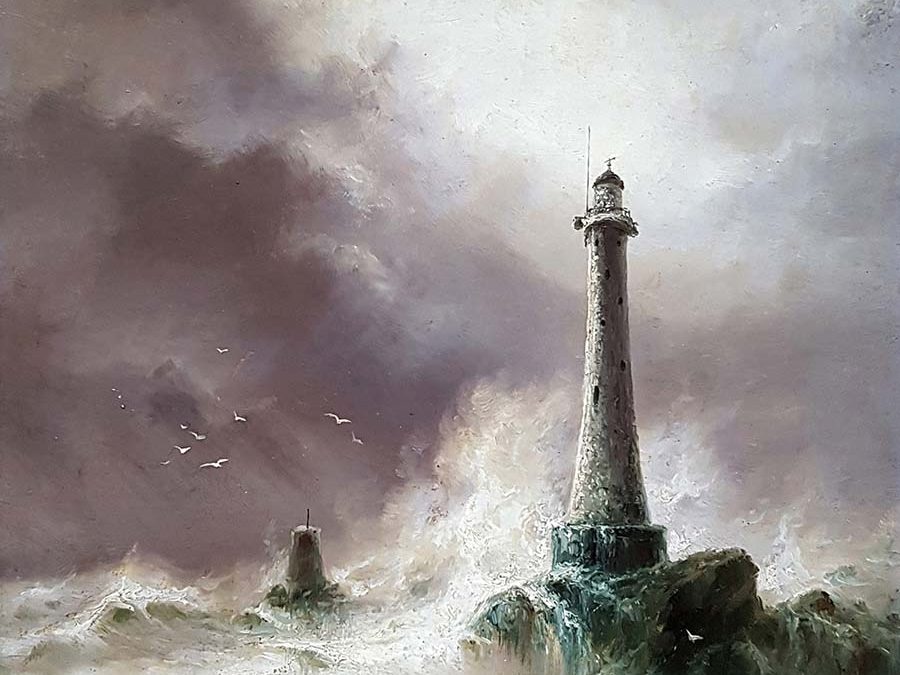 The painting shows the fourth lighthouse marking the treacherous Eddystone Rocks, 13 miles south-west of Plymouth. Designed by Sir James Douglass and completed in 1882, the lighthouse replaced Smeaton’s famous tower, itself an amazing feat of engineering, which had stood sentinel on the rocks since 1759. In the 1870s, when cracks appeared in the rocks beneath Smeaton’s structure, a new lighthouse had to be built. Smeaton’s tower was partially dismantled and re-erected on Plymouth Hoe. The remaining stump, which still stands on the Eddystone Rocks, can be seen in Kilpack’s painting.

A highly accomplished painter of seascapes, coastal scenes and landscapes, Sarah Louisa Kilpack was born in Covent Garden, London, and lived above the family’s tobacconist shop in the heart of the bustling fruit, flower and vegetable market. Her shy personality meant she was often happy to stay indoors, drawing or playing the piano, and she quickly developed an impressive aptitude for both. Sarah Louisa’s family came to rely increasingly on the fees from her concerts, which also enabled her to travel. She was a frequent visitor to the Channel Islands and the South West of England and drew inspiration from the sea and the sky and the sunsets and storms which she painted so well. By the 1880s Sarah Louisa was earning about £500 a year from her painting. She produced many works for exhibition in London, notably at The Society of Women Artists, where she displayed more than 100 paintings between 1867 and 1909.